How Does Joanna Gaines Stay in Shape?

It’s like some kind of celebrity phenomenon – somehow, they all manage to bounce right back after having a baby, making all of us “regular” moms feel like we can’t measure up. Joanna Gaines is no exception to this rule. Still, it’s hard to hate her for it because she’s so darn humble.

Anyone who follows Joanna Gaines on social media – and there are close to 9 million of us – knows that she’s not one to shy away from a cupcake or other gluten-loaded treat when she’s craving one. In fact, Joanna often writes about cooking classic Southern treats in her kitchen like biscuits and gravy and pancakes from scratch. So you know she’s not sitting around nibbling on lettuce leaves all day long.

How does Joanna Gaines manage to stay so fit despite giving birth to five babies? It’s not easy, but it is achievable. Meal prep doesn’t have to be a chore – in fact, planning out what you’re going to eat each week can help save you money since you won’t buy too much at the grocery store. It’ll also help you feel less stressed when you inevitably hear the dreaded question: “What’s for dinner?”

Joanna Gaines admits that meal prepping can sometimes fall through the cracks in her household, but she still makes an effort to figure out what the family is eating as often as possible. It also helps everyone make healthy choices rather than resorting to unhealthy fast food.

She bakes at home Let’s face it – there’s a big difference between scarfing down Twinkies and occasionally treating yourself to some freshly baked homemade chocolate chip cookies. Even when Joanna Gaines does indulge, it’s usually something she made herself, not a pre-packaged item that’s full of chemicals and preservatives. That makes a huge difference when it comes to maintaining her waistline.

One study found that 75% of people who lost 30 pounds or more (and kept it off) ate breakfast every single day. It’s no wonder they call it the most important meal of the day! It’s obvious that Joanna Gaines subscribes to this train of thought since she frequently posts about her morning meal, which is likely to include hearty favorites such as eggs, bacon, pancakes, and healthy fruit juice. Plus, coffee. Because she does have five kids.

She grows her own vegetables Growing vegetables in your garden is a smart way to make sure you eat enough of them. Joanna Gaines admitted on Instagram that she roasts the veggies in the oven with a simple mix of olive oil, salt, and pepper to get her kids to eat them. It’s obviously working!

She indulges in healthy snacks

Joanna Gaines fuels her body with simple, healthy snacks such as homemade Power Balls which are packed with protein. Snacking on foods such as these helps her stay fuller longer and reduces the temptation of a candy bar later.

She doesn’t deprive herself

It’s obvious that Joanna Gaines doesn’t restrict sweet treats when the opportunity arises. The key factor? She doesn’t necessarily eat cupcakes and cookies every single day, so these delicious baked goods are always a special occasion. Allowing yourself this type of arrangement can help you stick to a stricter, healthier eating plan long term because you know you won’t miss out on your favorite goodies. 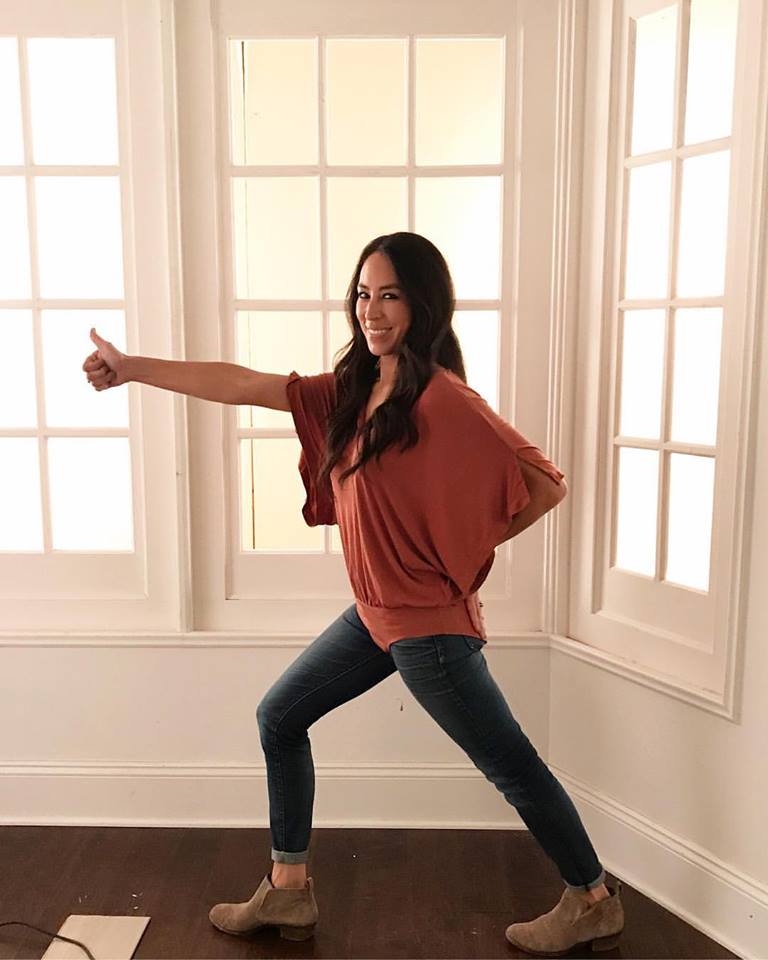 Perhaps the most important thing Joanna Gaines does to stay in shape is staying active. It goes beyond chasing kids around – she also runs a thriving business, works on her farm, and even participates in fitness challenges.

Joanna doesn’t have time to spend hours at the gym, but she has posted online that she often carves out 20 minutes per day for quick workouts that might include sprinting, rowing, or strength training. The other thing that factors in? She doesn’t have a television at home. That means Joanna’s downtime is more likely to include some kind of physical activity than it is vegging out on the couch watching Netflix.