If you were a fan of How I Met Your Father star Hilary Duff in the early 2000s, you know that she can sing. Her Hulu show has put her vocal talent to use a few times now, including in the HIMYF Season 2 premiere. Fans got to hear a Percy Sledge cover in the new episode, but apparently, Duff almost sang hits from Kelly Clarkson or Carrie Underwood. Here’s what she said about making the musical scene.

[Spoiler alert: The following story contains minor spoilers for the season 2 premiere of How I Met Your Father.]

What is the comfort song in ‘How I Met Your Father’?

In season 1 of How I Met Your Father, Sophie’s (Duff) comfort song became a running joke. She loved Train’s “Drops of Jupiter” and sang it whenever she felt lost or overwhelmed. Fans were treated to Duff softly singing the tune to herself on a few different occasions.

“How could it not be that song?” Duff said of Sophie’s comfort song choice in an interview with Consequence’s Kyle Meredith. “Like that is everyone’s secret anthem. … I love that that is Sophie’s song because it’s so her. She’s just lovable and dorky and for that to be her like, end-all-be-all theme song is just very fitting.”

The first episode of How I Met Your Father Season 2, which dropped on Jan. 24, features another quirky musical moment. At a last-minute wedding reception for Hannah (Ashley Reyes) and Sid (Suraj Sharma), Sophie hops on a table and offers to sing their song — “When a Man Loves a Woman” by Percy Sledge. However, Sophie isn’t familiar with the tune, so she makes up her own hilarious lyrics.

As Decider reported, Duff revealed during the Television Critics Association’s winter press tour that the Percy Sledge song was one of three power ballads considered for the episode. The other two were hits by Kelly Clarkson and Carrie Underwood — “Since U Been Gone” and “Before He Cheats.”

“There were a couple of runners up, and this was, I would say, 30 minutes before we shot,” Duff explained. “And it was like ‘Oh, is it going to be Kelly Clarkson’s ‘Since U Been Gone?‘ No, no, but go work on that one, OK? All right, is it going to be Carrie Underwood’s ‘Before He Cheats’? Which is like, you were giving me some people with some big, broad voices.”

We would have loved to see Duff pay tribute to either one of those American Idol icons. In all fairness, though, Sophie butchering “When a Man Loves a Woman” is a great moment. Plus, we’d be a little concerned if Sid and Hannah’s love song was a breakup anthem. Hopefully, we’ll get to see Duff’s Carrie Underwood and Kelly Clarkson covers in the future. 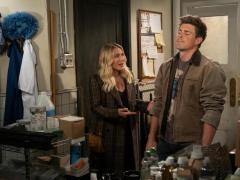 ‘How I Met Your Father’ Star Hilary Duff Had a Bad First Day on Set: ‘I Got in the Car and Cried’ 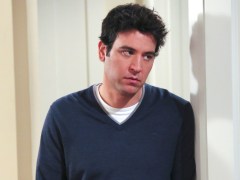 ‘How I Met Your Father’: Will Ted Appear in Season 2? Josh Radnor ‘Wouldn’t Turn Down an Invitation’ 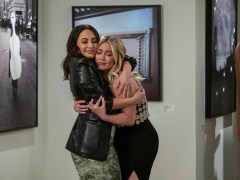 ‘How I Met Your Father’ Season 1 Recap: 7 Things to Remember Before Season 2

In addition to Hilary Duff showcasing her musical talent, How I Met Your Father Season 2 promises more hilarious adventures, surprising twists, and a legendary HIMYM cameo.

“We know these characters, we feel a little bit more comfortable,” Duff said on the tour, per ABC News. “We just get more room to play and experience and find these little human bits in the roles. It feels easier to find and a little more secure this time around.”

New episodes of How I Met Your Father Season 2 drop every Tuesday on Hulu. Check out the release schedule for more details.