[Spoiler alert: The following story contains spoilers for How I Met Your Father Season 1.]

Sophie met the father on the night of the engagement party

The series began with Sophie and her roommate, Valentina (Francia Raisa), who had just brought a new boyfriend, Charlie (Tom Ainsley), home from England (more on that below). Sophie headed out for a first date with a marine biologist named Ian (Daniel Augustin). On her Uber ride there, Sophie met Jesse (Chris Lowell) and Sid (Suraj Sharma). They all ended up at the surprise engagement of Sid and his girlfriend, Hannah (Ashley Reyes). Sophie also befriended Ellen (Tien Tran), Jesse’s adopted sister.

We later found out that the father of Sophie’s future son is one of the guys she met that night. So, it could be Jesse, Sid, Charlie, or Ian. It could also be Drew (Josh Peck), whom Sophie dated throughout the season. He was there that night, too. It’s possible that another partygoer will be introduced in season 2, becoming another candidate for the father.

Valentina met Charlie, a rich aspiring model, at London Fashion Week. The two quickly fell in love, and Charlie followed her back to New York. His family cut him off, so he had to learn how to make it on his own in New York and stuck by Valentina. This caused some tension because Valentina thought he was being clingy.

Later, Charlie moved into an apartment with Ellen and continued dating Valentina. However, they realized at the end of season 1 that they disagreed on a major life decision: kids. Charlie doesn’t want any, but Valentina wants a family. They ended their relationship in the finale because of this.

Sid and Hannah eloped after struggling with distance and wedding expenses

Even the newly-engaged Sid and Hannah weren’t safe from relationship troubles. Hannah worked as a surgical resident in Los Angeles, while Sid owned a bar called Pemberton’s in New York. They struggled with their long-distance relationship throughout season 1.

Financial issues also arose, as Hannah felt concerned about the money Sid spent on the bar. They disagreed on some wedding expenses, so Sid and Hannah decided to just elope in the finale. Given all their differences, though, it seems unlikely the marriage will last.

Jesse’s ex, Meredith, asked him to tour with her

At the start of the season, we learned that Jesse had his heart broken by his former bandmate, Meredith (Leighton Meester). She turned down his marriage proposal, and the moment went viral on social media. He finally started to move on from her — until she showed up in New York. Meredith wrote a hit song, “Jay Street,” about Jesse and her regrets about not marrying him. She came back to ask him to go on tour with her.

Jesse and Sophie hooked up, but Sophie got scared

The chemistry between Jesse and Sophie has been undeniable from the start. However, Sophie went on to date Drew, and Jesse was still hung up on Meredith. Then, Sophie and Jesse finally shared a kiss in How I Met Your Father Season 1 Episode 8. Sophie decided to break up with Drew to give Jesse a chance. She and Jesse hooked up, prompting cheers from HIMYF fans everywhere.

Unfortunately, Jesse and Sophie didn’t last long. He muttered “I love you” in his sleep, which freaked Sophie out. She told Jesse to go on tour with Meredith. But thanks to a pep talk from How I Met Your Mother‘s Robin Scherbatsky (Cobie Smulders), Sophie changed her mind. She ran back upstairs from MacLaren’s pub to Jesse’s apartment, only to find Jesse and Meredith kissing. It seems he might be considering the tour proposal after all.

Ellen has a new job and a date 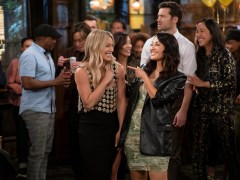 ‘How I Met Your Father’: The Best Fan Theories Ahead of Season 2

‘How I Met Your Father’: The Major Difference From ‘HIMYM’ That Could Save the Series From a Hated Finale

‘How I Met Your Father’: Hilary Duff Doesn’t Know Who the Father Is — ‘I’ve Given Up’

No How I Met Your Father Season 1 recap would be complete without discussing Ellen’s journey. The former produce farmer moved to New York from Iowa after she divorced her wife. She hoped to reconnect with Jesse, who was separated from Ellen as a child when their own parents got divorced.

Like Charlie, Ellen struggled to adapt to life in a new city with new people. After moving into her new apartment, she met Rachel (Aby James), the granddaughter of Ellen’s late neighbor. Ellen pretended to know Rachel’s grandmother, which backfired on her. However, she got another chance with Rachel after she moved into her grandmother’s apartment and Ellen found her cat. They have a date planned, and we can’t wait to see how it turns out in season 2.

That wasn’t the only good news for Ellen. She applied for a job as a produce buyer at Goliath Market’s corporate office and got offered the position. Hopefully, that’s a connection to HIMYM‘s Goliath National Bank and will lead to a Barney Stinson (Neil Patrick Harris) cameo.

Ian returned to New York in the finale

Ian moved to Australia for a job after his date with Sophie, and they decided to call it quits. He seemed out of the picture until the finale, when he surprised Sophie at the art gallery. Apparently, the boat Ian worked on was owned by HIMYM‘s The Captain (Kyle MacLachlan) and Becky (Laura Bell Bundy). Becky caught The Captain cheating and divorced him, seizing and sinking his boats in the process. Ian lost his job, freeing him up to return to New York. It’s very possible he and Sophie will continue their romance in season 2.

How I Met Your Father Season 2 premieres on Tuesday, Jan. 24, on Hulu.