How Is Meghan Markle Dealing With Her Jet Lag and Pregnancy While Traveling?

Since announcing her pregnancy on Oct. 15, 2018, Duchess Meghan Markle hasn’t slowed down one bit. In fact, when Kensington Palace announced that Prince Harry and the duchess were expecting their first child, the newlyweds were just beginning the first day of their first official royal tour as a married couple. Their tour which began in Australia will also lead them to Fiji, Tonga, and New Zealand.

How has the duchess, who is reportedly about 14-weeks along been dealing with the exhaustion that comes with pregnancy and travel-induced jet lag?

Meghan Markle in a yoga pose| Silentyogacz via Instagram

Yoga is the key

Though Markle has reportedly been “feeling well” and very healthy since her 12-week scan, she and Prince Harry’s schedules were initially packed full. The pair were set to take on 76 engagements on the tour including, the Inviticus Games, meeting with His Majesty King Tupou VI and Queen Nanasipauʻu in Tonga, and playing with the adorable koalas at the Taronga Zoo.

While in Austraila on Oct. 19, 2018, the duchess and the prince sat down with mental health advocacy group OneWave, where the duchess shared how yoga had been helping her through her trip. She said, “[Being pregnant is] like having jet lag without actually traveling.” She went on to reveal that she’s been having trouble sleeping. However, since she wakes up at 4:30 a.m. each morning and can’t seem to go back to sleep, she’s started to practice yoga in those very early morning hours. She said, “[It’s] so good for healing your mind.” 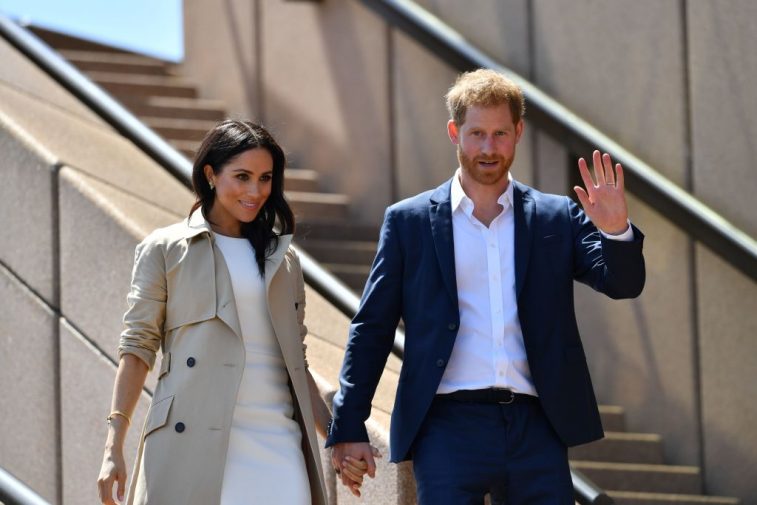 Though Markle seemed to flawlessly make it through the numerous events on her schedule during the first week of the royal tour, Kensington Palace has decided to lighten up her schedule a bit. A royal insider revealed to ABC News, “She’s feeling fine but resting. We have to make sure she is well-paced and not overdoing it. She wants to do everything, but Prince Harry is encouraging her to pace herself. If it has been a very late night due to unforeseen circumstances, we have to adjust for that.”

On Monday, Oct. 22, 2018, Prince Harry began his day in Fraser Island, Australia alone. He helped dedicate the Forests of K’gari to the Queen’s Commonwealth Canopy, and he participated in a traditional welcoming ceremony. Later in the afternoon, Markle joined her husband at Kingfisher Bay Resort Jetty.  If you’ve noticed, on more than one occasion, Markle has traded in her signature royal pumps for flats, sandals, and even sneakers.

Today The Duke of Sussex unveiled The @QueensCanopy dedication for the Forests of Fraser Island (K’gari). #RoyalVisitAustralia pic.twitter.com/EUjwGDJ4xm

We’re just glad that Markle is not stretching beyond her limits.

Since Markle is pregnant, she can’t exactly rely on Nyquil and other over the counter medications to make sure that she remains healthy and gets enough sleep while on she’s on this first royal tour. Luckily, the royals have some tried and true hacks to combat jet lag and germs that won’t harm her baby.

According to Business Insider, she strategically eats meals to beat jet lag, swabs her nose with Neosporin to avoid germs, and brings along a cozy scarf or blanket for draftier events and dinners.