How Long Were Donald Trump and Ivana Trump Married?

The scandals, love affairs, and marriages of President Donald Trump are a popular topic in all realms of conversation. It is a well-known fact that he has not had the best luck with the ladies… although some might argue his luck has certainly been prolific.

Trump is now on his third marriage, with First Lady Melania Trump. Rumors have abounded about two love affairs he may or may not have had during his 14-year marriage to Melania. This should come as no surprise, considering both his other marriages ended in infidelity.

But long before he became a twice-divorcee, he married for the very first time. The lucky lady? Ivana Zelnickova.

Ivana Zelnickova was born on February 20, 1949 in Zlin, Czech Republic. She pursued a number of different high-profile careers early on, including as a professional skier. Ultimately, it was modeling that she stuck with – and which introduced her to future husband, Donald Trump. Once married, Ivana had a big part in building the “Trump Empire,” and her savvy business smarts paid off several times over.

Where did the two meet?

The first Trump couple met for the first time in 1976. Ivana was visiting New York City for a fashion show and went to the Upper East side one day to get a bite to eat at Maxwell’s Plum, which is now closed. Ivana and some of her friends were waiting to get a seat in the much-desired eatery when Trump makes a beeline for her.

According to an article in the New York Post, he said, “I’m Donald Trump and I see you’re looking for a table. I can help you.” So, Ivana turned to her friends and said, “The good news is, we’re going to get a table real fast. The bad news is, this guy is going to be sitting with us.” Donald ate his meal with the young ladies, and waited outside for Ivana after. They began dating almost right away, and married less than a year later.

When did they get married? 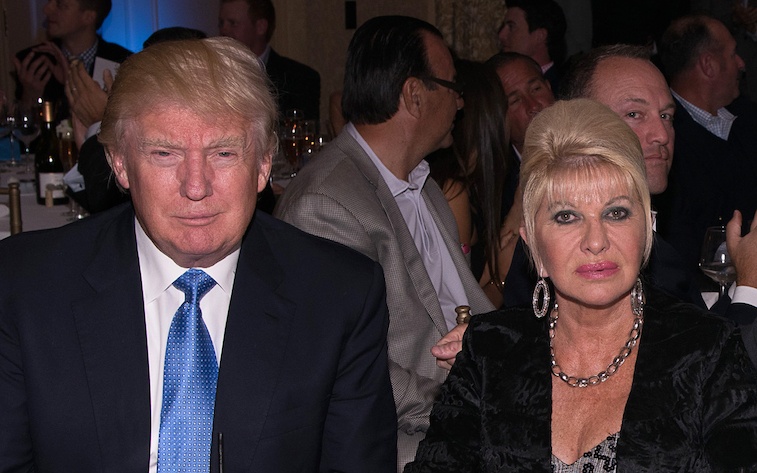 Donald and Ivana got married on April 7, 1977 at the Marble Collegiate Church. Unfortunately, images of their wedding couldn’t be found. This is surprising, considering wedding images can be found with both Marla and Melania.

How many kids do Donald and Ivana have together?

Of Trump’s five children, three of them are with Ivana. They had their first child, Donald, Jr. in 1977. In 1981 came the couple’s only daughter, Ivanka. She was followed in 1984 by younger brother, Eric. Donald and Ivana are also grandparent, now. Donald, Jr. has five children, and Ivanka has three.

Why did Donald and Ivana Trump get divorced?

Ivana filed for divorce in 1991 when it came to light that Donald was having an extramarital affair with American actress, Marla Maples. Maples would go on to be Donald’s second wife just a year after the divorce with Ivana was finalized in 1992.

The exact moment that Ivana knew it was over, however, was much more intense. She was sitting in a restaurant one day when a young woman approached her. She said “I’m Marla, and I love your husband. Do you?” Ivana responded, “Get lost. I love my husband.” It was then that Ivana knew her marriage to Donald was over. Ivana did walk away with a $12 million settlement, however, so not all was lost.

Ivana told The New York Post, “[There’s] this tall blond guy with blue eyes. He said, “I’m Donald Trump and I see you’re looking for a table. I can help you.” I look at my friends and said, “The good news is, we’re going to get a table real fast. The bad news is, this guy is going to be sitting with us.”