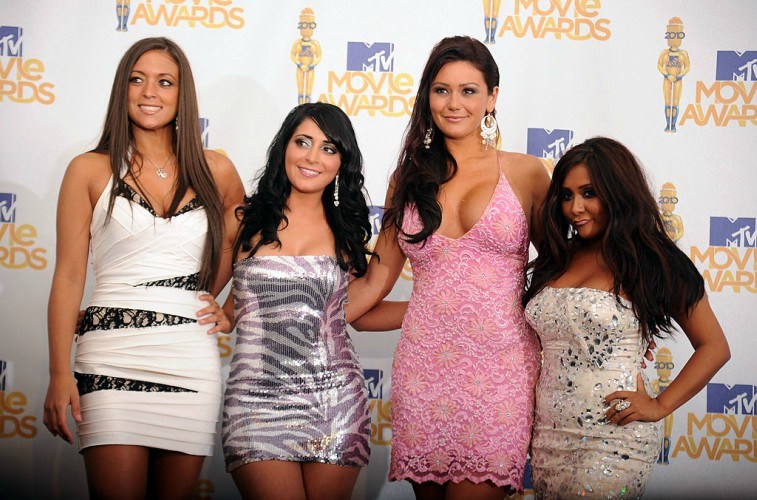 Angelina Pivarnick is back for Jersey Shore: Family Vacation Part 2, and not everyone is happy about it. Pivarnick’s reentrance to the franchise was rocky last time, but there was hope of her building a friendship with the rest of the cast. After the first season, she got back on Jenni “JWOWW” Farley’s bad side. How did that happen? Here are seven things to know about their feud.

The reality star was in the first season of the show but left because she refused to work at the T-shirt shop. When she returned for Season 2 she punched Mike Sorrentino after he insulted her, then fought Snooki for hooking up with the same guy she previously hooked up with.

Farley wasn’t happy when Pivarnick returned last season. “Not once did you try to make amends in eight f*cking years,” she said to her on the show. She also said Pivarnick burned a bridge with her on social media. “I didn’t have you blocked, b*tch! You blocked me on every f*cking social media.”

3. Pivarnick was able to make amends with the cast before leaving

After the blowout, Farley and the rest of the cast did come around. This is what Pivarnick wanted. “I waited almost nine years for this,” she told People. “I wanted to make amends with everybody and show them that I’ve changed.”

4. After the show, Pivarnick accused Farley of trashing her over a fan’s petition

It didn’t take long for their feud to start up again. Pivarnick claimed Farley insulted a Change.org petition a fan made to get her back on the show, according to TMZ. “I saw Jenni going in on me in the press saying ‘Change.org that’s like to save dolphins,'” said Pivarnick in a video.

She also claimed Farley accused of her of making the petition herself. “I didn’t make it a fan made it,” continued Pivarnick in the video.

5. Pivarnick tagged Farley in a photo of a mug reading ‘Jersey Wh*re’

While Season 1 aired, the reality star made their feud public again when she posted a photo of a mug reading “Jersey Wh*re.” In the caption, she wrote according to Us Weekly, “TOMORROW IS MY RETURN ON @jerseyshore !!!! Can’t wait for you all to see,” with “I will be sipping my TEA out of my amazing cup I dedicate to @jwoww #IMBACK #KEEPHATIN #jealousyisadisease.”

Farley responded in the comments with “Who’s following who?! Jealous of what? Your third engagement or third chance in the house?” Pivarnick replied with “lmfaooooooo yeah ok. ARE YOU EVEN ON THE SHOW THIS YEAR YOURSELF I HAVENT NOTICED. ALL YOU DO IS SLEEPING.”

Farley doesn’t deny this with her response of “rather be sleeping than regret looking like you on national tv.”

6. Farley puts Pivarnick in a headlock in Season 2

Now Pivarnick is back for Family Vacation. In the Sept. 13 episode, we see Pivarnick repeatedly try to joke with Farley in the club. But when she tries to put ice down her dress things take a turn. Farley puts her in a headlock and we have to wait and see what happens next.

7. Pivarnick said she and Farley are ‘taking baby steps’

It looks like the two are trying to get along once again after filming Season 2 of Family Vacation. Pivarnick told Us Weekly, “We’re taking baby steps – very little, tiny baby steps into getting to know each other.”