It seems Kate Middleton embodied the saying, “never let them see you sweat,” when Harry & Meghan Volume II premiered. The same day the second installment of Prince Harry and Meghan Markle’s Netflix docuseries dropped, she hosted a Christmas carol concert. According to an expert, the royal not only proved herself to be “the rock of the royal firm” but she said a lot with her body language.

All eyes were on the Princess of Wales — and other royals — during a festive evening at Westminster Abbey on Dec. 15. Just hours after the last three episodes of Harry & Meghan began streaming, complete with claims about Prince William and the palace, Kate put on her second annual Christmas carol concert.

The Prince and Princess of Wales were there with their two oldest children, Prince George, 9, and Princess Charlotte, 7. Body language expert Judi James closely examined Kate’s arrival, saying she looked like “the rock of the royal firm.”

“She holds her gloves and clutch bag in one hand so the other can hang by her side rather than forming a body barrier,” James observed. “Her thumb even looks cocked, which is a signal of enthusiasm and keenness.”

“Normally her ‘royal’ smile is completely symmetric,” the body language expert said. “But here she seems to be showing an asymmetric smile that is pulled up slightly higher at the right side.”

“This is more of a ‘knowing’ smile with a slightly more human touch to it, suggesting what could be a flicker of recognition from the storm caused by the Netflix series,” she said.

The catch, she added, is that Kate’s smile had a “look of resilience rather than any sign of anxiety or wariness.”

Beyond Kate’s smile exuding confidence and resilience, was her raised chin. Holding her head high showed “maximum resilience,” according to James. William, meanwhile, looked “muted” with “a rather fixed-looking smile.”

Kate Middleton, Prince William, and Princess Charlotte had matching outfits in a potential ‘statement of unity’ 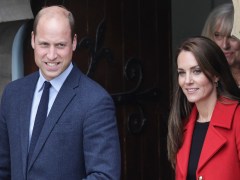 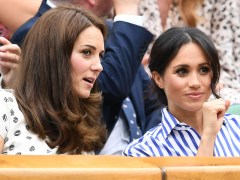 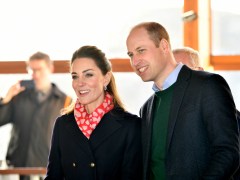 In addition to Kate’s “confident” body language, her clothing sent what James said could be a strong message as well. Her burgundy ensemble matched William’s tie and Charlotte’s dress in a possible “statement of unity.”

And they weren’t the only royals in the shade of red. “Several other royals seem to have got the memo and come dressed in similar shades to register a display of uniform loyalty,” James said.

Even Kate’s hair, swept to the side, suggested confidence, James added.