Khloé Kardashian: Every Detail We Know About Her First Child

Khloé Kardashian is a mom! She finally welcomed her baby girl, which she couldn’t have been more excited for. She shared in an Instagram post three days before giving birth to her first child, “We are ready whenever you are little mama.”

Here’s everything we know about Kardashian’s new baby girl, including who was in the delivery room at the time of her birth (page 5) and how Kardashian is reacting to the news of her boyfriend’s ill-timed cheating scandal (page 7).

Kardashian already let fans in on the news that she was expecting a girl, with a planned gender reveal on Keeping Up With the Kardashians’ Season 14 finale.

Next: Kardashian announced her baby’s name.

2. Her baby’s name is True Thompson

She finally revealed her baby’s name. | Khloé Kardashian via Instagram

Four days after giving birth, Kardashian announced her baby girl’s name: True Thompson. She shared in an Instagram post, “Our little girl, True Thompson, has completely stolen our hearts and we are overwhelmed with LOVE. Such a blessing to welcome this angel into the family! Mommy and Daddy loooooove you True!”

Kardashian certainly followed in her family’s footsteps by choosing a unique name for her baby. Kim Kardashian and Kanye West welcomed Chicago West via surrogate in January 2018, and Kylie Jenner welcomed baby Stormi Webster in February 2018 with boyfriend Travis Scott.

Next: They took these measures for her birth.

3. Kardashian had extra security for her birth

She had a security team looking after her. | Khloé Kardashian via Instagram

Kardashian delivered her baby at the Hillcrest Hospital near Cleveland, where she arrived the night before her delivery. The hospital was sure to provide extra security for Kardashian, “with a security officer assigned to stand guard outside her room,” according to Page Six.

Next: Her birth comes at a scandalous time.

Not the stress she needed right before going into labor. | Robert Littal via Twitter

Kardashian gave birth just two days after her boyfriend and baby daddy, Tristan Thompson, was caught in a cheating scandal. According to Us Weekly, “Daily Mail published photos and videos on April 10 of the Cleveland Cavaliers player appearing to kiss another woman at a New York City club.”

TMZ also released a video the same day of Thompson kissing two women in October 2017 at a hookah bar. A source told Us Weekly, “None of his friends are surprised.” Apparently, “They all know he cheats.”

Next: Was Thompson there for the delivery of his daughter?

The entire family had been excited about the baby. | Khloé Kardashian via Instagram

Page Six revealed that Kardashian was surrounded by close family during her daughter’s birth. Mom Kris Jenner, along with sisters Kim Kardashian and Kourtney Kardashian, were reportedly by her side. 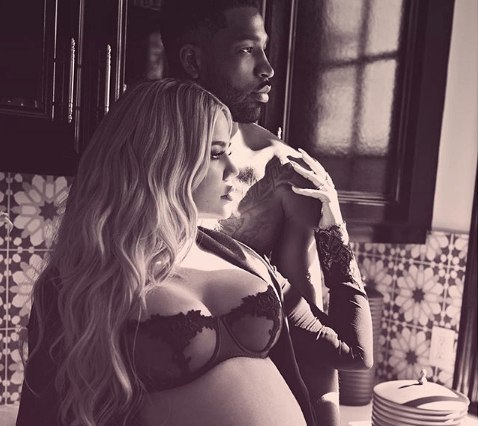 Even if sources close to Thompson aren’t surprised by his cheating scandal, Kardashian clearly didn’t see it coming. Since they made their relationship official in September 2016, she hasn’t stopped gushing over him.

Kardashian even dedicated much of her Instagram pregnancy announcement to her beau:

Next: This is how Kardashian feels about Thompson’s behavior.

7. Kardashian was devastated by Thompson’s behavior

She will most likely lean on her family for support. | Khloé Kardashian via Instagram

Thompson’s cheating scandal is unsurprisingly hitting Kardashian pretty hard. A source close to the Kardashians told Page Six that Khloé “was devastated when she saw the pictures of Tristan with that girl, she went absolutely ballistic at him.”

The source added, “She is not only hurt, she is humiliated and worried for their child. How could he do this, and so publicly, when their baby daughter could arrive within a week?”

Now that their baby is here, we’ll have to wait and see how Kardashian and Thompson choose to move forward in their relationship.