The NBC comedy Cheers comes from a bygone era of television, one in which theme songs were integral to the series. The Cheers theme song was memorable with its chorus “where everybody knows your name.” Today, most shows can’t spare 30 seconds for a theme song. The new Night Court throws fans a bone with just 10 seconds of it. NBC had other issues with the opening of Cheers in the ‘80s.

Cheers writer Ken Levine revealed the 2 issues the Cheers theme song and opening titles caused the network on his Hollywood & Levine podcast. It wasn’t the lyrics, which the creators of the show changed prior to the pilot.

As “Where Everybody Knows Your Name” played, Cheers did not show photographs of the actors. Instead, they listed cast names over artistic likenesses during the theme song.

“Main titles were done by Castle Bryant [Johnsen] and were pretty remarkable,” Levine said on Hollywood & Levine. “NBC originally loved the opening titles and then the show floundered in the ratings. When the show premiered, Brandon Tartikoff who was the president of the network came to all of us sitting in the writers room and said, ‘Look, you guys are doing great work. Don’t change anything. If the show doesn’t do well early on, we still believe in it. Don’t change anything. You’re doing a fantastic job.’”

NBC wanted to show the ‘Cheers’ cast during the theme song

Tartikoff himself reconsidered on the artistic opening titles to Cheers. This wouldn’t be the only time Cheers creators disregarded network notes.

Who do you think was the person who suggested that we change the titles? Yup, Brandon Tartikoff. What he wanted was more of the standard type titles where you saw the actors and maybe a clip of them doing something zany, those awful cliche opening titles because they were saying well, the names are up there but you don’t know who’s who? We figured well, yeah, but there’s classy. They’re classy. And the song and the whole mood. It’s telling a story. It’s setting the tone for the show. It’s not just about seeing George Wendt have a cross eyed expression. They wanted that changed and of course it wasn’t.

NBC wanted a different singer too 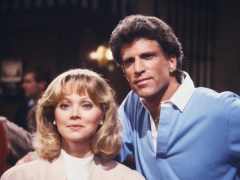 ‘Cheers’ Tried 1 Money Saving Trick That Ended up a Disaster 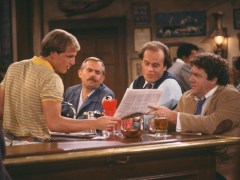 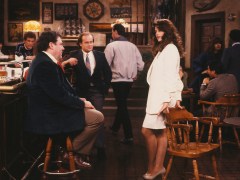 Kirstie Alley: How ‘Cheers’ Made Her ‘Cocky’ and Prepared Her for the Future

“The theme that you hear was not the very first attempt at a Cheers opening title theme by the composers Gary Portnoy and Judy Hart Angelo,” Levine said. “They had another couple of songs. The Charles Brothers didn’t really take to them. Then they came up with this and everyone said, ‘Oh, okay, that sounds pretty good.’”

Once everyone agreed “Where Everybody Knows Your Name” would be the Cheers theme song, they assumed they’d hire someone else to sing it. This is where Portnoy stood firm and made television history.

“Once he knew that the Charles Brothers and Jim Burrows really liked the theme, he said. ‘I’ll only give it to you if you let me sing the opening title sequence,’” Levine said. “Now, he had sung the demo and we all liked the demo, so they said okay. And he went off, he recorded it at a studio in Paramount. I remember we were unable to go and watch the recording session because we had a script that was due to go to the table, something like that. So none of us were actually there to witness the performance of the famous song.”