Movie magic takes a ton of moving parts. From the director and cinematographer to the folks who do the lighting and the costumes, making just one film takes a ton of effort and energy from hundreds of people. While actors have to memorize their lines, their stunt doubles are right by their sides during long days and long nights standing in for them when a director might need an actor’s physical presence but not their words or dialogue.

Many actors, especially those on the A-list rely heavily on their body doubles to help them bring their characters to life. They are so instrumental that many of these people have known and worked with their body doubles for years. Not only are these body doubles helpful, they often look so much like A-listers that you will probably be stunned.

Reese Witherspoon has been a significant force in Hollywood since the ’90s, acting in everything from teen flicks like  Cruel Intentions to her most revered work on HBO’s Big Little Lies and in the biopic, Walk the Line. Though she hasn’t exactly been with Witherspoon since the beginning, the Wild actress’ body double Marilee Lessley has been by Witherspoon’s side on five different film sets and on Big Little Lies.

Recently, she introduced Leesley to her Instagram family saying, “Meet Marilee! She has been my double in 5 movies and now she is helping out on #BigLittleLies! Don’t we look alike?!”

Next: When you have to look to your family to find a double.

There is almost no one on earth that could hold a candle to Dwayne Johnson, except perhaps his cousin, Tanoai Reed. Reed has been by his cousin’s side for the past 17 years on films like Jumanji: Welcome to the Jungle, Baywatch and Rampage. Considering the number of stunts and action Johnson puts into his roles, Reed has had some tough shoes to fill.

To thank his cousin for all of his hard work, Johnson gifted Reed a custom pickup truck as a token of appreciation.

Next: This stunt double helped one comedian feel pretty. Meredith Richardson is known for her work in everything from Jurassic World to The Maze Runner, and she’s also stood in for Amy Schumer in her film, I Feel Pretty. It was the second film Richardson worked on with Schumer, and the comedian was happy to shout out her homegirl on Instagram. Ben Affleck has done everything from thriller films like The Town to superhero flicks like Batman v. Superman: Dawn of Justice. His longtime stunt double and friend, Rich Cetrone has been by his side for five of those films. Recently while filming the forthcoming movie, Triple Frontier, Affleck posted his appreciation for Cetron on Instagram.

He wrote, “Movie #5 with this legend – Rich Cetrone. Grateful to work with such incredible people.”

Next: Apparently Thor is out here twinning We already thought we were fortunate because Chris Hemsworth has two brothers. However, he also has a hunky stunt double named Bobby Holland Hanton who has the Aussie actor’s same god-like body. Hanton has been by Hemsworth’s side almost from the beginning. He told news.com.au that his only issue with the job is maintaining his body.

He explained, “Thor is definitely the most difficult character that we have to get in shape for. Chris is already huge; he’s much bigger than me naturally so I have to train twice a day. It’s a job in itself.”  We’d say all the training is well worth it.

Next: Sometimes a vampire slayer also needs some backup When she was kicking butt in the ’90s as the iconic Buffy the Vampire Slayer, Sarah Michelle Gellar did tons of stunts, and she had her stunt double Sophia Crawford right by her side to make sure that Buffy was as legendary as she could have been. She even took on that first epic fight between Buffy and Faith.

Since Buffy, Crawford has done everything from Bones to Jason Bourne.

Next: This stunt double isn’t afraid of the supernatural. With almost 300 episodes and 14 seasons of Supernatural under their belt, Gilmore Girls alum Jared Padalecki and his stunt double, Mike Carpenter are as thick as thieves. They often shout each other out on Twitter. Padalecki once posted a cheeky tweet of his look-alike stunt double saying, “@Stuntcarpy He’s… Right beside me…. Isn’t he?…”

Next: These girls clearly stuck together. Though Lena Dunham’s Girls character Hannah wasn’t exactly on the streets of Brooklyn doing stunts, she was fairly clumsy which meant her character often found herself in sticky situations. When Girls wrapped it’s final season, Dunham made sure to praise her stuntwoman Dakota Brown saying, “No, this is not a remake of multiplicity. It is my stunt double Dakota & me. Any time I need to crash a car or fly off a bike, this bad bitch appears <3.” We’re here for it.

Next: This “Venom” actor obviously has a twin. We hope you’re sitting down for this one because we’d like to inform you that Tom Hardy’s body double looks EXACTLY like him. While working on Mad Max: Fury Road, the British actor introduced the world to Jacob Tomuri.

From the height to the beard, there isn’t anything that the Venom actor has that Tomuri doesn’t, and we are beside ourselves with glee about it. When Mad Max wrapped, Tomuri tweeted, “A celebratory picture taken at the end of our 7.5 month adventure #madmaxfuryroad #tomhardy #jacobtomuri #stunts x”

Next: This actress’ stunt double is out of this world. 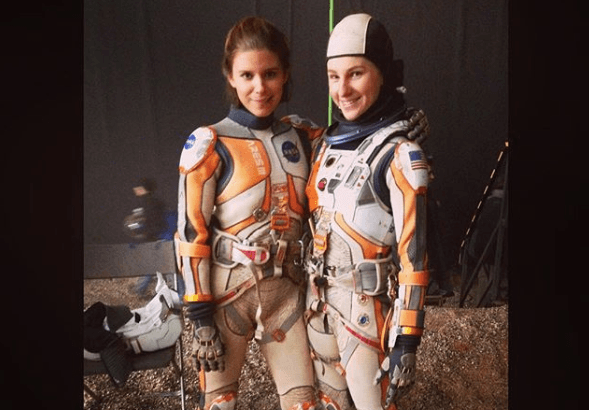 Professional stunt double Casey Michaels is pretty much a thrill-seeking beast who tackles all of her roles head-on. However, out of all the stunts that she’s pulled off over the course of her career has been as Kate Mara’s stunt double on the film, The Martian.

On Instagram, she wrote, “That time I got to be an astronaut. My favorite costume so far.” From the looks of her Instagram accounts, Michaels has been everywhere from space to the tops fo the snowiest mountains.

Next: This stunt double defies gender and age. We’ve basically watched Chandler Riggs grow up before our eyes as Carl Grimes on The Walking Dead. However, when it comes to those zombies and all of that blood, Riggs has had a helping hand to lead him on along the way. Stuntwoman Emily Brobst is actually 15 years older than Riggs, but she has been happy to step in for him when the action sequences got too intense.

Next: It’s not quite James Bond, but almost. Sometimes stunt doubles have the stance and the swagger and other times they literally have to play with fire and explosions. Ben Cooke has been by Daniel Craig’s side in three of the James Bond movies, so it’s clear that he knows what he’s doing.

He’s also pretty attractive, so we think that also helps a bit.

Next: This actress and her stunt double are thick as thieves.

Jennifer Garner is no stranger to action, she kicked butt for years on the ABC drama, Alias and her friend, Shauna Duggins was right there with her the entire time. Duggins went on to work with Garner on 13 Going On 30, Elektra, and Daredevil.

Duggins also has the distinction of being the first female stunt performer to be nominated for an Outstanding Stunt Coordination Emmy. Garner wrote the sweetest note about her friend on Instagram saying, “Pretty much anything cool I’ve ever done on film has had my #WCW behind it– either being her #badass self or, more often, urging me, coaching me, cheering me on from the sidelines as I do something half as well as she could.”

Next: Two Star-Lords are better than one.

We love that actors tend to be loyal to their stunt doubles when they can. Ever since Chris Pratt stepped on to the Marvel scene as Star-Lord, he has been kicking butt in everything from Jurassic World to Avengers. Since Jurassic World, the Parks & Rec alum has had stuntman Tony McFarr by his side.

On the set of Guardians of the Galaxy Vol. 2, Pratt posted a photo of him and McFarr saying, “Here’s me and my stunt-man Tony McFarr. Been working with Tony since Jurassic World. Love you buddy! Happy wrap.”

Next: There are two mothers of dragons.

Emilia Clarke might be one of the most badass women left on Games of Thrones, but her stunt double, Rosie Mac, might be more famous than her. The English-born, Spanish-raised Mac looks nearly identical to Clarke on GoT, and though she is a stunning woman as is Clarke, we have to say the costume and the iconic blonde hair are what helps bring Daenerys to life.

Mac randomly got the role when she uploaded a photo of herself to the Internet with a Danareys hairstyle and an agent picked it up and sent it in.