The Stories Behind Prince Harry’s Exes, Including the 1 Who Cried Before His Wedding

Prince Harry and Meghan Markle had a fairytale wedding to celebrate their obviously true and passionate love for one another. Though Harry’s reportedly never dated anyone who made him fall in love as quickly as Meghan did, he used to be quite the bachelor before his now wife came along.

Read on for a look at the stories behind Prince Harry’s exes, including one he had an emotional phone call with prior to his wedding (page 7).

Cressida Bonas, an English actress and model, dated Harry for two years. The two were introduced by Harry’s cousin, Princess Eugenie, and had an amicable split in 2014. They’re still friends and keep in touch; Bonas was even invited to Harry and Meghan’s wedding.

The thing she was most nervous about prior to attending her ex’s wedding? What hat she’d wear. “Why do I find hats so tricky? Tricky to wear, tricky to look at, and extremely tricky for the poor soul sitting in the pew behind,” said Bonas.

Next: This TV host said when she was dating the prince she felt like “Harry’s bit of rough.”

Harry dated X Factor host Caroline Flack in 2009. The two started dating after they were set up by a mutual friend, but as soon as the relationship went public they decided to end things.

“Once the story got out, that was it. We had to stop seeing each other. I was no longer Caroline Flack, TV presenter, I was Caroline Flack, Prince Harry’s bit of rough,” said Flack.

Next: Harry ended things with this ex when she started sharing too much information about their relationship.

Mollie King, an English singer, dated Harry for a brief period in 2012. Rumors initially started to spark that the two were dating when they were seen out together at a London bar. According to Evening Standard, the short-lived couple first met at the 2010 Asprey World Class Cup at Surrey’s Hurtwood Polo Club.

Harper’s Bazaar says Harry ended things when King seemed to be too open about their relationship in public.

Next: Harry reportedly would serve this ex girlfriend breakfast in bed.

When Harry and Davy split in 2010, he started seeing Norwegian singer Camila Romestrand. According to CBS, the singer reportedly would stay the night at the royal’s home and he’d serve her breakfast in bed.

“She talks about staying overnight at ‘the Palace.’ She says he was a ‘total gentleman’ but doesn’t divulge much else,” says a source.

Next: Harry had a thing for singers.

Though Harry and pop star Ellie Goulding were never officially publicly dating, there was most likely something going on behind the scenes. Dating rumors started after the two were seen getting cozy under blankets together and kissing at the polo in Bershire in 2016.

“The two have reportedly been good acquaintances for years, after Goulding performed at Prince William and Kate Middleton’s wedding in 2011 and then again at Prince Harry’s Invictus Games in 2014,” says Harper’s.

Chelsy Davy, a Zimbabwean businesswoman, and Prince Harry had an on-and-off romance between 2004 and 2011. The two met while attending boarding school and became very close during their time together (Davy even met Harry’s grandmother, the queen). Ultimately, Davy said the pressure of being Harry’s girlfriend got to her.

“It was so full-on: crazy and scary and uncomfortable. I found it very difficult when it was bad. I couldn’t cope. I was young, I was trying to be a normal kid and it was horrible,” she said in 2016 of being Harry’s girlfriend.

Next: The tearful phone call the two shared before the wedding

7. The emotional phone call between Chelsy and Harry 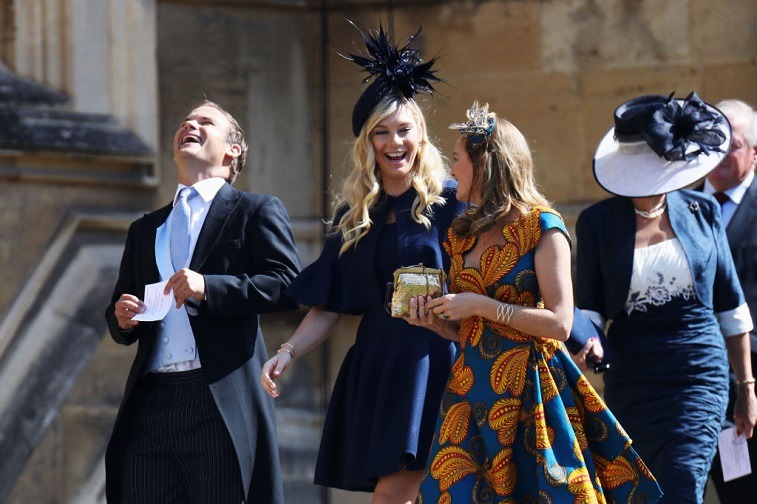 The two are on good terms. | Chris Jackson/Getty Images

According to Fox News, Davy reached out to Harry upon learning she’d been invited to the wedding ceremony but not the private reception.

“It was their final call, a parting call in which they both acknowledged Harry was moving on,” claims a source. “Chelsy was quite emotional about it all. She was in tears and almost didn’t go to the wedding. In the end, she went and promised Harry she wouldn’t try and gatecrash the party.”

Though she looked cheerful in front of cameras entering the event, viewers at home were quick to point out Davy’s somber face during the ceremony.