Before she married Prince Harry, Meghan Markle broke royal protocol on several occasions. But she was given a pass. as many figured she would learn the rules and adjust to them over time. However, there is another royal who hasn’t had a problem with continuously bending the rules over the years.

Princess Eugenie of York has broken a number of royal rules she is expected to follow, but one in particular is really not sitting well with the queen (page 5). Here’s which rule that is, as well as some of the others the princess goes against.

Something the British royal ladies are not supposed to do is wear revealing outfits but Eugenie’s attire over the years doesn’t stay in line with that rule.

The princess has been spotted in everything from miniskirts to leather dresses to those with cutouts and plunging necklines — even though the royal family has a policy that only modest dresses with below-the-knee hemlines should be worn to events.

Next: The princess doesn’t pay attention to the rule regarding coats.

Eugenie removes her coat in public

Something else Eugenie isn’t supposed to do is remove or carry her coat over her arm. The rule is that members of the royal family should never take off their coats while out as it’s deemed “unladylike to undress in public.”

You’ll notice that when the Queen Elizabeth or other royal women attend an engagement, they usually show up in coats.

Next: The princess carries the wrong type of handbag.

She may be wearing a clutch here, but she doesn’t always follow that rule. | Arthur Edwards – WPA Pool/Getty Images

Protocol about what style purse to carry is one that Eugenie often goes against. It’s also a rule Markle broke when she first started showing up to appearances with Prince Harry.

The former actress eventually learned that she isn’t supposed to carry a crossbody or mini bag and ditched them for the appropriate clutch style. Eugenie, however, still wears crossbody bags from time to time instead of a clutch which are used to make it easier for the royals to avoid giving unnecessary handshakes.

Beaumont Etiquette founder Myka Meier explained that Kate Middleton always carries a clutch for that reason noting, “When the Duchess is at an event, she holds her bag in front of her in both hands when shaking hands might be awkward.”

Next: The princess’ choice of cosmetics also goes against protocol.

Another thing the royals don’t do is wear bright makeup. The rule also applies to nail polish as well. The duchesses and princesses are supposed to wear neutral lip and eye colors, but Princess Eugenie hasn’t always followed that rule as she’s been spotted at events in the past wearing bold red lipstick.

Wearing such a color isn’t permitted at formal occasions.

Next: The princess continues to break her grandmother’s strictest rule. 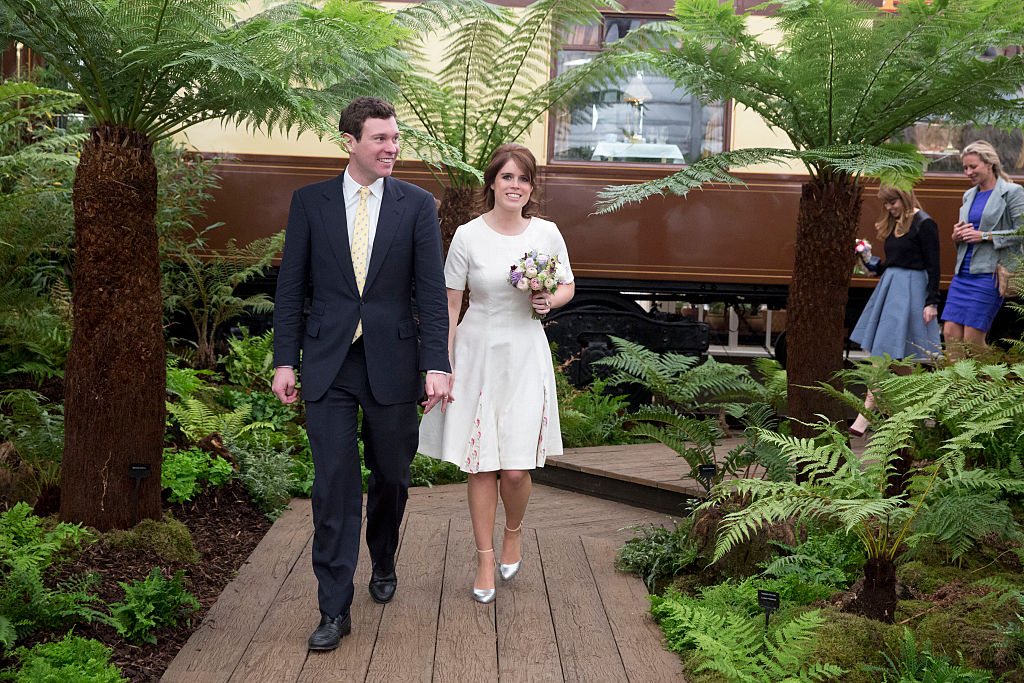 She does away with the pantyhose. | Heathcliff O’Malley – WP Pool/Getty Images

A firestorm erupted after Markle was photographed following her engagement announcement to Prince Harry without wearing nude stockings. That’s because one of the queen’s most steadfast rules is that ladies wear tights at all times and not show their bare legs.

Eugenie, however, has skipped out on wearing pantyhose to quite a few affairs including her cousin and Markle’s wedding. Maybe she was just hoping her grandmother wouldn’t notice.

Next: The princess made her own social media account.

She is active on social media. | Chris Jackson PT/Getty Images

Eugenie went ahead and made her own Instagram account in March 2018, even though social media accounts are not something the young royals keep. Announcements about William, Middleton, and Prince Harry are made on the official Kensington Palace Twitter account, but they don’t have their own separate accounts.

When a Facebook account once thought to belong to Harry (under the name Spike Wells) was questioned, it was promptly deleted. Furthermore, when Markle and the prince first went public with their relationship, she got rid of her Instagram.

Next: The princess may go against royal traditions at her upcoming wedding.

What traditions Eugenie will break at her royal wedding?

On Oct. 12, 2018, Princess Eugenie will marry her fiancé Jack Brooksbank and its anyone guess as to what part of the royal rule book she’ll rip up to make the big day truely her own.

Perhaps everything Eugenie has done differently than other royal ladies isn’t necessarily about breaking the rules, but more about modernizing the monarchy.