Times have certainly changed drastically since the queen was married seven decades ago. However, on the heels of her diamond wedding anniversary, all of the lovely details from her big day are certainly still classic.

Their love blossomed from the very start. | AFP/Getty Images

Queen Elizabeth was only 21 when she married Prince Philip, but she had been infatuated with the young officer (who is also her distant cousin) from the time she was 13. The duo had met at a wedding and would go on to become pen pals. The young heiress even kept a photo of her future husband by her bedside.

The pair became secretly engaged in 1946. However, Queen Elizabeth’s father, King George insisted they wait until the future queen turned 21 to announce their engagement.

Next: An unfit groom

It was a rocky path for the young princess to get the groom of her dreams. Though the blond naval cadet was super attractive, he was practically penniless, and his parents had abandoned him due to mental illness and sordid affairs. King George and the rest of the royals felt that he was “unpolished, arrogant, destitute,” and — worst of all “too German.” Forty percent of British citizens were against the match.

However, the princess was determined to marry Prince Philip so he became a British citizen and was named Duke of Edinburgh just before they married.

Next: Rationing for a wedding gown

Coupons for a wedding dress

The wedding was definitely a group effort. | Reg Speller/Getty Images

In 1947, Great Britain was still recovering from WWII, and rationing was still in effect. Therefore, the future Queen of England had to save up clothing coupons in order to purchase her wedding gown.

Though she had 200 coupons, British citizens felt that it wouldn’t be enough, so they kindly mailed in theirs to help her.

Next: Beading, silk, and a 15-foot train

Here is another look at the detail in Her Majesty The Queen's wedding dress, made in 1947 from ivory silk and decorated with crystals and 10,000 seed pearls. The dress will be on display at the Summer Opening of the State Rooms at ‪#‎BuckinghamPalace from 23 July to 2 October. #Queenat90 #HM90fashion #fashion #style #HMTheQueen #TheQueen #instastyle #WeddingDress #1940s

Designed by Norman Hartnell, the gown was commissioned just three months before the royal wedding day. Made of Chinese silk, the dress had 10,000 seed pearls, a 15-foot ornate train and it was covered entirely with delicate floral designs.

Next: “Rebirth and growth”

Queen Elizabeth’s gown took 350 women and seven weeks to make. It was supposed to represent “rebirth and growth.”

Next: A shattered crown

The crown and gown was exactly to her liking. | Central Press/Stringer

Queen Elizabeth’s crown, held in place by a silk tulle veil, broke while she was getting dressed for her ceremony. Luckily, a royal jeweler was on hand to repair it right away.

As far as tradition goes, a glam squad is not needed for the bride. | John Stillwell/AFP/Getty Images

2,500 guests attended Queen Elizabeth and Prince Philip’s wedding ceremony. This was pre-television, so the wedding was broadcast on the radio to 200 million listeners.

Six kings and seven queens were also in attendance.

Next: A whole crop of bridesmaids

She had her entourage close by at all times. | Hulton Archive/Getty Images

The guest list wasn’t the only massive party at the ceremony. Queen Elizabeth also had eight bridesmaids including her sister, Princess Margaret.

Next: The bouquet mystery

Queen Elizabeth carried a massive orchid bouquet to her ceremony and then she left with it. However, it is missing from the rest of her wedding photos.

So what exactly happened to it? The bouquet mysteriously vanished before photos were taken and was never seen again.

The prince was gifted a box of fancy cigars. | Topical Press Agency/Getty Images

The young couple was obviously showered with gifts even though the British economy was still on the rebound. They received over 2,500 wedding presents from around the globe, and over 10,000 telegrams of congratulations were sent.

Next: From Westminster Abbey to Buckingham Palace 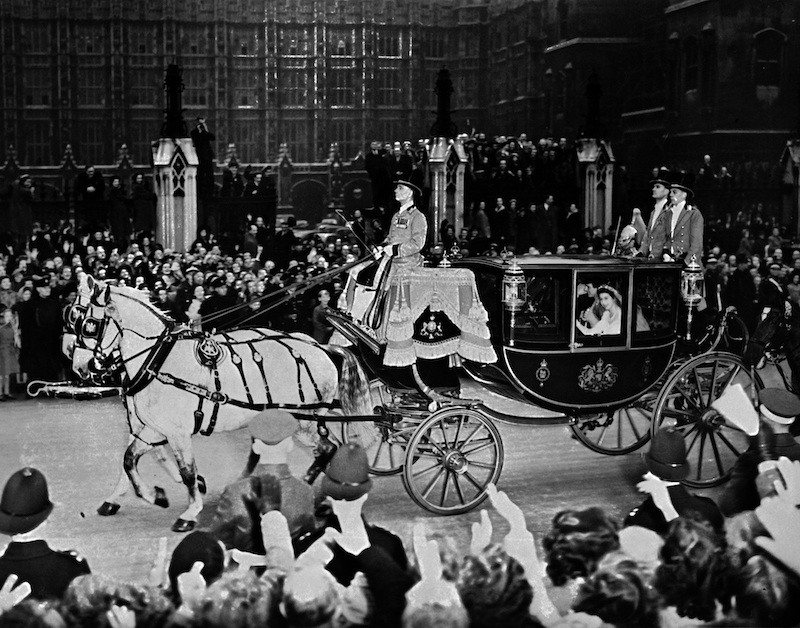 Queen Elizabeth and husband Prince Philip are cheered by the crowd after their wedding ceremony. | AFP/Getty Images

The stunning royal wedding took place at Westminster Abbey. After the ceremony, the couple traveled by carriage to Buckingham Palace where they waved at an astounding crowd of people from the balcony.

As with any massive wedding, Queen Elizabeth and Prince Philip’s day wasn’t without a bit of drama. Queen Elizabeth’s uncle, the Duke of Windsor (the royal formally known as King Edward VIII), was not included on the guest list. He had abandoned the throne to marry the twice-divorced American socialite, Wallis Simpson, and the royal family was still pissed about it.

Next: Fruitcake and royal icing

The cake was something out of a fairytale wedding. | YouTube

A massive wedding needs a massive cake. The sky-high treat was 9-feet tall and weighed over 500 pounds. The four tiers were fruit cake covered in royal icing.

It was then adorned with flowers and intricate hand-piped detail.

They traveled together right away. | Fox Photos/Stringer/Getty Images

Prince Philip and Queen Elizabeth spent their wedding night in Broadlands, Hampshire at the home of Prince Philip’s uncle, Earl Mountbatten. For the rest of their honeymoon, they stayed in Birkhall on the Balmoral Estate.

She had a chance to relive her wedding. | Sion Touhig/iStock/Getty Images

Unfortunately, Queen Elizabeth and Prince Philip couldn’t even enjoy their honeymoon without interruptions. Because of the mysteriously vanishing bouquet, they had to return to the palace in the middle of their honeymoon to reshoot their official wedding photo — this time with orchids.

By that time, the florist had made an identical bouquet to the one that had gone missing.