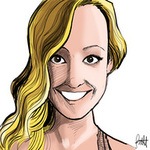 Ali Harrison joined the Endgame360 team in 2015 and has been in the publishing industry since 2012, building from a background in radio production. She works most often with contributor content on Sportscasting and Showbiz Cheat Sheet, given her personal interests in athletics and the entertainment industry. On Sportscasting, she focuses the most on the NFL, NBA, golf, UFC, and tennis — a sport she competed in during high school and college.

Ali is a lifelong fan of the Michigan State Spartans and has become a huge fan of the Denver Broncos and Colorado Rockies. She loves going to athletic events — everything from minor-league baseball teams (go Albuquerque Isotopes!) to Broncos home games at Mile High Stadium. Her love of Breaking Bad, The Office, and reality TV inform her pop culture coverage on Showbiz.

Ali earned her bachelor’s degrees in English and Communication with a Creative Writing emphasis from Hope College. She’s inspired by the work of The Gist, a female-led sports media startup, and highlights from Just Women’s Sports. In her spare time, you might find her reading a favorite book by Anne Lamont, James Clear, or Brené Brown.

Actors and Actresses Who Admitted to Stealing Props From Their Sets

The Most Controversial Award Show Winners of All Time

Save Money By Renting, Not Buying, These 15 Things

Which States Have the Most Underrated Wine Regions?

These Are the Most Expensive Things in World

Dark Secrets You Never Knew About the Rockefeller Family

The Surprising Things You Never Knew About Joan Rivers

These U.S. Cities Are the Safest Places to Live, Work, and Play

Surprising Kitchen Items That Could Be Worth Money

These Are the Most Depressed U.S. States

Music Festivals 2016: Which Ones Are Worth Going To?

7 Ways to Travel Cross-Country Without a Car