Daniel Craig became synonymous with the title character of the James Bond franchise. He has now stepped away from the role, but fans may have difficulty seeing him other than the spy. However, the actor may become iconic for another growing franchise.

Craig starred in Knives Out, and he reprised his role for the sequel. Glass Onion, on Netflix. The director had a note for the accent when Craig first played the character. However, the star ignored the stage direction, helping to create the iconic Benoit Blanc.

A new cast for ‘Glass Onion’

The previous Knives Out film featured a stellar cast that included Chris Evans and Jamie Lee Curtis. However, most of the stars did not reprise their roles for Glass Onion: A Knives Out Mystery. The reason is that the newest installment focuses on a different location and set of characters.

One of the central characters is a billionaire named Miles Bron. This new character is played by award-winning actor Edward Norton. Miles is the former business partner of Andi Brand, who Janelle Monae portrays.

Monae also plays Andi’s twin sister Helen, who is the one to hire the private investigator. Additional notable cast members include Dave Bautista, Kate Hudson, and Kathryn Hahn. The only person from the first Knives Out to return is Daniel Craig.

Craig came back to solve yet another murder mystery as Benoit Blanc. His character has to figure out if Andi truly died because of suicide. While he talks to each person, viewers once again hear the notable southern drawl from Craig.

Daniel Craig used a thick accent despite the stage directions

One thing that stands out about private investigator Blanc is his southern accent. After Glass Onion‘s release, Daniel Craig revealed that his character was supposed to sound somewhat different. He talked about getting the role in an interview with BBC Radio 1.

When Craig received the first Knives Out script, he got excited. He wanted to work with Rian Johnson for a while, and the two met and talked about the movie. Then, Craig got a look at the stage directions for filming his scenes. He noticed the director’s advice for the character’s accent.

“He came up, we sat, and we chatted. I pointed at the stage direction, which said ‘Benoit Blanc.’ I think sitting in a chair with a lilting, subtle southern accent. I clearly just ignored that piece of stage direction. I went with this. Yea, I went to 11,” Craig explained.

Craig’s exaggerated southern drawl seemed to fit since Johnson allowed him to keep using it. Now, viewers might be unable to imagine Benoit sounding any other way. They enjoyed seeing him again and hope he returns for more sequels.

What people have thought about ‘Glass Onion’ 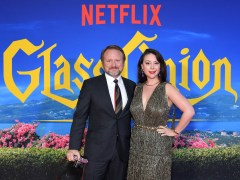 Glass Onion had a limited theatrical release in less than 700 theaters across the country. The movie raked in over $13 million at the box office before it became available to stream on Netflix. Overall, the film has received a positive reception from viewers.

Many people enjoyed the mystery and the allegory in the story. While many previous cast members did not return, viewers still loved the performances. Plenty of critics have praised the first sequel of the franchise as well.

According to CinemaBlend, several critics believe the movie succeeded in branching off the first installment. They see Glass Onion as proof that “Rian Johnson has nailed the sequel game in its tracks.” However, a few do not feel the movie is as great as the original.

One sentiment is that the visuals are great, but the sequel “loses steam heading into the climactic third act.” Nonetheless, the twists left most audiences on the edge of their seats. They can likely expect another suspenseful sequel in the future.