‘Flip or Flop’: How Much Is Christina El Moussa Worth, and What Does Her Home Look Like?

In January 2018 Flip or Flop hosts, Christina and Tarek El Moussa’s divorce shook HGTV fans to the core. Although the permanent split was announced in 2016, the finalization in January turned the lingering news into reality.

The divorce has been especially hard for Tarek since he’s watched Christina move on with her new beau, Ant Anstead, as well as their family home hit the real estate market. Out of the old house and into a new chateau, Christina is now creating a space all her own.

Is this the Flip or Flop star's home fans would expect? http://elledcr.co/vfkWSHf

While they were together, the couple poured $1.5 Million into renovations for their Yorba Linda home. Despite the investment, Christina El Moussa sold the luxurious mansion in May for $3 Million. The sale is symbolic of the estranged couple putting their rough past behind them, an essential move if they want to continue hosting Flip or Flop together and successfully co-parenting their kids.

Christina’s new home is nothing like the old one

The previous residence was known for its ornate European style. However, the turnkey $4.1 Million home in Newport, California is nothing like the lavish mansion the divorcees previously owned. The pricey purchase is more than double the cost of the Yorba Linda home and blows Tareks $2.28 Million bachelor pad out of the water.

The blond bombshell’s new home is sleek and transitional, perfect for someone starting over. It was remodeled in 2016, and both the bathroom and bedroom received HGTV’s design award. While the interior of the old house was a neutral palette consisting of black, white, and gray with gaudy accents and a feminine touch, her new home throws all of that out the window for a warmer palette and lax atmosphere. 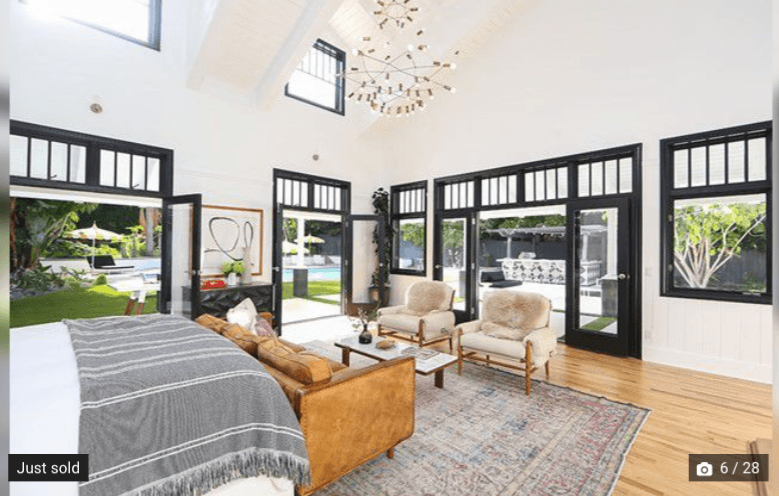 The new bedroom sports neutral colors, similar to the master bedroom she shared with Tarek, but that’s where the similarities end. Vaulted ceilings and white walls make the room light and bright while dark trim around the windows and doors give the room a coastal farmhouse vibe. This is a far cry from the luxury feel of the old bedroom, which was decked out with silk, fur, and mother of pearl finishes.

A playroom makeover for the El Moussa kids

The kid’s playroom takes a hint from the bedroom with the vaulted ceilings, white walls, and dark trim while furnishings add a level of warmth that was lacking in the old house. A beautiful barn door, a look Joanna Gaines would be proud of, separates the playroom from the rest of the home. The Yorba Linda playroom stuck to cooler neutrals with pale gray walls, furniture, and decor. But, the new playroom utilizes tans and browns to create a welcoming and playful interior. 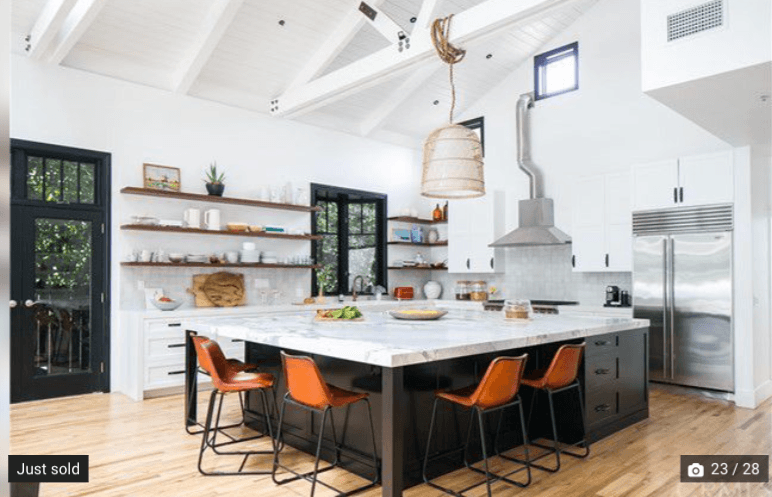 The old kitchen rocked the professional chef vibe with high-end appliances and a full-size wine cooler, but Christina’s new kitchen is much more laidback. Both kitchens have large marble-topped islands, a must-have for family gatherings, but where the old kitchen had dark gray cabinets to contrast the counters, the new kitchen utilizes open shelving. Dark brown cabinetry and copper accents compliment the floating shelves, pulling the farmhouse look together.

The new family room leaves the luxe look behind

Christina said goodbye to the black, silver and gray palette and moved on to something lighter. White walls and matte black trim give the room a modern farmhouse touch while the tan, orange, and red color palette add a Spanish flair. The focus, much like the previous home, is large glass doors that overlook the backyard making indoor-outdoor living a breeze.

Who can forget the mansion’s backyard? It was a retreat complete with waterfalls, a rock slide, mini putting green, and a large heated saltwater pool. While the new yard keeps the pool, it’s not nearly as spa-like. Colorful cabana-style umbrellas, large trees, and a manicured lawn make it feel like a modest vacation home, but it’s only a matter of time before Christina starts turning it into a dream playland for her children.

What’s Christina El Moussa’s net worth after all of this?

I’m so excited to announce my new series on HGTV called Christina on the Coast, which will debut in early 2019! I will be helping homeowners redesign their outdated properties into beautiful spaces! #ChristinaOnTheCoast #HGTV

With her continued work with Tarek on Flip or Flop and her new show, Christina On The Coast debuting in 2019, how much is the HGTV star worth? According to Celebrity Net Worth, Christina El Moussa is worth an estimated $6 Million. This isn’t surprising considering the pair make $10,000 per episode on Flip or Flop and keep the earnings from the houses the flip on the show. Despite the $500,000 loss on the sale of the home and money that went into the divorce, it looks like Christina’s net worth didn’t take much of a hit and is only going to climb next year.