Even though Gilmore Girls has been off the air for years, fans still turn to the series when they want to enjoy some old-fashioned nostalgia and a heavy dose of early 2000s feels. The series ran for seven seasons, allowing fans to follow along with the adventures of Lorelai Gilmore, played by Lauren Graham, and her intellectual daughter Rory, played by Alexis Bledel. Romance was a central element in Gilmore Girls, with Lorelai dating several eligible men during the series run before settling down with Luke. One of these men was Max Medina, a character who has caused some controversy in the fan base – although viewers seem to universally agree that Lorelai’s parents wouldn’t have approved of Max.

When fans first met Lorelai Gilmore, the single mom seemed not to be that interested in dating. However, in the show’s very first season, she connected with Rory’s high school English teacher, Max Medina, played by Scott Cohen. Max pursued Lorelai aggressively throughout the first season after initially hitting it off at Chilton Parent Night. Their relationship suffered after Paris Geller caught them kissing – but they reconciled, dating early in the show’s second season.

After Max met Luke, he started feeling threatened by Luke’s closeness with Lorelai – proposing to her at the end of a heated argument. Lorelai accepted, but the course of love didn’t ultimately run smoothly for Max and Lorelai, with Lorelai breaking things off with her teacher boyfriend before they had the chance to tie the knot. After the breakup, Lorelai and Rory take off on a road trip, shedding the memory of the relationship and preparing for a fresh start.

Lorelai and Max’s romance wasn’t exactly traditional. While he made Lorelai happy for a time, it is likely that her uptight parents, Emily and Richard Gilmore, probably wouldn’t have liked him. After all, Emily and Richard are both from “old money.” While Max likely received an Ivy League education and worked as an occasional adjunct professor, he clearly wasn’t very wealthy.

Fans only got the chance to see Emily Gilmore and Max Medina interact once when Lorelai went to her mother’s house to express her anger for not congratulating her on her engagement. During that brief encounter, Max and Emily didn’t really talk much, leaving a lot up to the imagination of fans and viewers.

What did fans on Reddit say about Lorelai’s romance with Max? 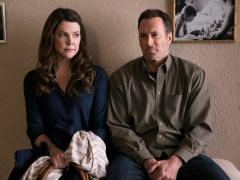 ‘Gilmore Girls’: Was Anna Jealous of Lorelai’s Relationship With Luke?

Fans on Reddit recently discussed the romance between Max and Lorelai, noting that Emily probably wouldn’t have liked Max at all. “I think Richard would have liked him, but Emily would have looked down on him and saw him as a mediocre choice for Lorelai,” one fan wrote. Fans also pointed out that it was weird how Max never attended one of the Gilmore’s infamous Friday night dinners, with one noting, “It was a missed opportunity in my book. He’s educated so he would make good conversation with Richard, Rory loves him, and he would try his best to appeal to Emily.”

“A definite missed opportunity and kind of odd considering how intense Emily was about meeting Jess. I think Max would have fit in nicely and smooth talked Emily into tolerating him because he’s well educated,” one fan wrote, noting that in the end, Emily likely still wouldn’t have approved of Max for her daughter. In the end, of course, Lorelai found love with Luke Danes, leaving many to wonder what could have gone down with Lorelai and the kindhearted English teacher.