Nautical, nutty, and nonsensical, SpongeBob SquarePants has been delighting audiences of all ages since 1999. Originally aired on the Nickelodeon network, the wacky animated underwater sitcom can now be enjoyed on Paramount+. However, you won’t find the entire SpongeBob series there. More than one episode has been banned from the popular streaming service. Here are the episodes, along with the reasons why you can’t see them on Paramount+.

Those familiar with SpongeBob would hardly consider the animated sea creature a menace to Bikini Bottom or any other society. Nickelodeon censors thought otherwise. Originally aired on Nick in 2003, the second segment of the third season episode was expunged from syndication and reruns back in 2018, explains Slate. For this reason, Paramount+ couldn’t air it today, even if they wanted to.

Entitled “Mid-Life Crustacean,” the 11-minute section of the show sees SpongeBob and his starfish pal, Patrick, attempt to jolly the miserly Mr. Krabs out of an apparent existential crisis. When activities such as a visit to the laundromat fail to cheer him up, SpongeBob and Patrick take Mr. Krabs on an old-school “panty raid.” Hilarity ensues until Krabs realizes they’ve raided his mom’s underwear drawer.

Paramount+ decided that a quarantine episode was in bad taste

Intended to air as the second half of episode 263 in 2020, “Kwarantined Krab” was not shown to the viewing public until the end of Season 12 in 2022. Animated in advance of the coronavirus (COVID-19) pandemic, the SpongeBob SquarePants episode revolves around a Bikini Bottom breakout of “Clam Flu” that puts residents into a panic.

As the plot of “Kwarantined Krab” unfolds, the Bikini Bottom health inspector pays a visit to the Krusty Krab, where he diagnoses a virulent case of “Clam Flu.” Immediately, the residents of the underwater town begin to suspect each other of spreading infection, and everyone that’s assumed to have the clammy virus is shunned and thrown into the restaurant freezer.

In 2021, when IGN asked about the removal of “Kwarantined Krab,” a Nickelodeon spokesperson explained that because that particular episode revolved around a virus storyline, the network “decided to not air it due to sensitivities surrounding the global, real-world pandemic.”

Other notable Nickelodeon and Paramount scandals

How ‘SpongeBob Squarepants’ Ended Up In ‘The King of Staten Island’ 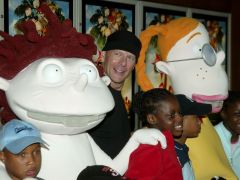 Did You Know Bruce Willis Sang in an ’00s Animated Nickelodeon Movie?

Founded by Adolph Zukor more than a century ago, Paramount Studios produces television shows, movies, and digital series at its 65-acre facility on Melrose Avenue in Hollywood, California. Decades before the studio made SpongeBob, Patrick, and Mr. Krabs stars, the movie maker employed human actors such as Gloria Swanson, Rudolph Valentino, Mary Pickford, and Douglas Fairbanks.

Comedic actor Roscoe “Fatty” Arbuckle was also an early contract player at Paramount. In fact, the chubby comic was the highest-paid movie actor of his time. That all went away when Arbuckle was charged with manslaughter in 1921. Played out in the newspapers of William Randolph Hearst, the ensuing trial was the first scandal to plague the venerable movie studio, explains Smithsonian Magazine.

SpongeBob SquarePants wasn’t the only Nickelodeon cartoon to face scrutiny, says Collider, which explains that the “Leap Frogs” episode of Rocko’s Modern Life was temporarily removed from play due to its overtly sexual undertones. The network’s preschool channel, Nick Jr., isn’t immune from controversy, either. As Nicki Swift reported, Nickelodeon was accused of plagiarism when the animated series, Made by Maddie, was found to be practically identical to the 2019 short film Hair Love, seen on IMDb.